These Web-pages are intended to describe some programming ideas, inventions and techniques differently denoted as lightweight handicraft technologies. They may be found useful for so-called handicraft programming, where somebody doesn't want to depend on high-level things (huge frameworks and similar) but only wishes to use the most fundamental tools like language, DBMS (its kernel functionality) etc. Here are represented some libs and simple tools as an example of how to build code at different levels without “extremely useful things” from giant software companies, but independently instead.

There are two main partitions: Handicraft-SDK and Client-Server.WEB (idea). As for tool-pack named Handicraft-SDK, some tools similar to those that is has now, have been used by its author for more than a decade (and this is not the first incarnation). The second part (idea of so-called Web client-server) has been formed (implemented for the first time) in first half of 2020.

It is not claimed that usage of proprietary code-base is entirely avoided. Microsoft platforms (.NET, Win32, SQL Server etc.) serve as foundation. The idea is how to be able to create own special program engine (simplified framework, libs and so on).

Some things contained in the SDK are purely experimental (such as CPlusMinus and NativeLib), some other things are very old-styled (Application Start technology is one of them; it is out of modern Web-trend). But inspite of existing implementation, Microsoft-oriented character and partial dependence on Windows-OS (Win32, CMD etc.), ideas represented in Handicraft-CODE may be interesting as potential for further re-implementation somewhere (on another platform or somehow else). 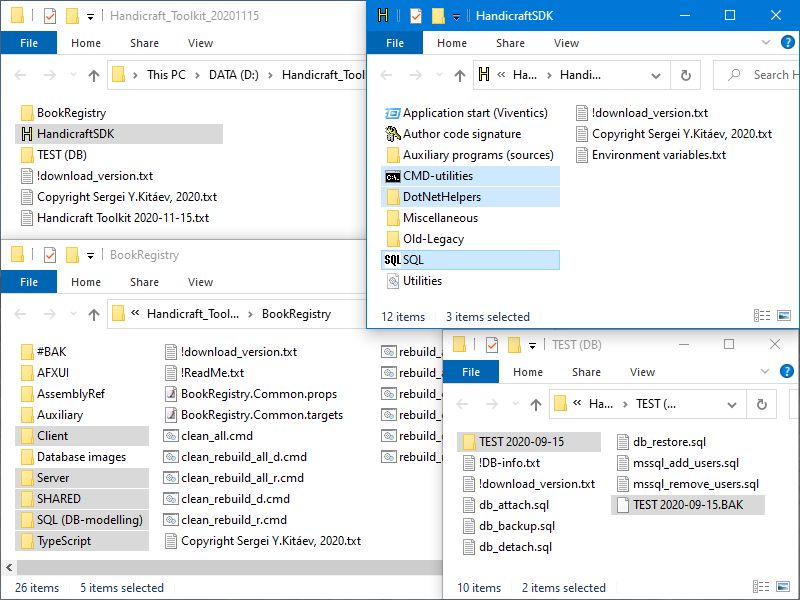 is present in the (), under Development::Components & Libraries category, see corresponding PAD-file:

PAD® is the Portable Application Description XML-format
of the (ASP).